One of my collaborative projects. This one with Mark Mangistrado 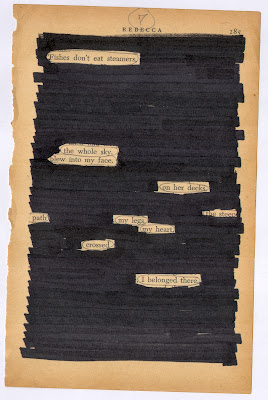 Salmon and Lobster Mayonnaise by ~magistrado on deviantART

Mabuhay ka Mark!
Posted by mermaid, with feet at 5:42 PM No comments: 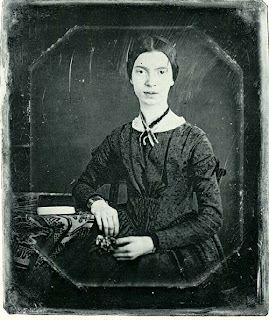 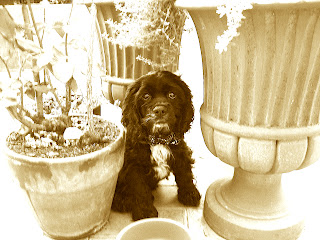 Went to Baguio over the weekend to pick her up. She is an an American Cocker Spaniel with a show dog mother (28 red marks). She has the same eyes as Emily Dickinson sans her name. I've had her for four days now. Everyday is a relearning of trust and unconditional love.

Before the trip back to Manila, she stepped into her own doggie bag without any urging. I snuck her onto the Dagupan Bus and she was quiet all though out the trip. She didn't fuss.

The things I've learned: She wants to eat at 6 am and 8 pm. Puppy Power begins at 4 pm and ends at 6 pm. She has taken over the garden. I was afraid she'd wreck the plants but she seems to be a gentle dog. She occasionally chews a leaf or two of mint and laurel. But that might just be an Italian past life. Her sacred space is between my lavander urn and white rose pot.
Posted by mermaid, with feet at 4:41 AM 1 comment:

My Dog Days have begun.

I waited for a french bulldog puppy this friend of mine had promised in October. December 25, I teared up like a child knowing I'd never have that puppy. I feel foolish thinking about it now. I texted everyone that I was going to get a dog, that it was just a matter of time. I believed. I hoped. The eight year old in me smiled and waited. Life stopped, waiting for this dog. Nobody really knew how important he was going to be in my life. He was the way into something else. Something Else. I visited websites. I surveyed vets. I made a puppy budget in my head.

Last saturday, I had a two dog weekend. I gave this little informal lecture at Silver Lens and was entertained immensely by a yorkie named Tiger. Then, in this 1930's aparment in Malate, Bogart, a terrier walked among the bohemian drawl. He picked up peanut shells tenderly from the narra floor. I put my hand around his heaving little sausage body and was quiet. Quiet like I had been Before Everything Began.

I've decided to take matters into my own hands. I will save up and buy this soul dog. I'm thinking of getting a french bulldog or a cocker spaniel.

Googled, what are dog days and got this answer:

The Dog Days of Summer

Everyone knows that the “dog days of summer” occur during the hottest and muggiest part of the season. Webster defines “dog days” as...
1 : the period between early July and early September when the hot sultry weather of summer usually occurs in the northern hemisphere
2 : a period of stagnation or inactivity

But where does the term come from? Why do we call the hot, sultry days of summer “dog days?”

In ancient times, when the night sky was unobscured by artificial lights and smog, different groups of peoples in different parts of the world drew images in the sky by “connecting the dots” of stars. The images drawn were dependent upon the culture: The Chinese saw different images than the Native Americans, who saw different pictures than the Europeans. These star pictures are now called constellations, and the constellations that are now mapped out in the sky come from our European ancestors.

They saw images of bears, (Ursa Major and Ursa Minor), twins, (Gemini), a bull, (Taurus), and others, including dogs, (Canis Major and Canis Minor).

The brightest of the stars in Canis Major (the big dog) is Sirius, which also happens to be the brightest star in the night sky. In fact, it is so bright that the ancient Romans thought that the earth received heat from it. Look for it in the southern sky (viewed from northern latitudes) during January.

In the summer, however, Sirius, the “dog star,” rises and sets with the sun. During late July Sirius is in conjunction with the sun, and the ancients believed that its heat added to the heat of the sun, creating a stretch of hot and sultry weather. They named this period of time, from 20 days before the conjunction to 20 days after, “dog days” after the dog star.

The conjunction of Sirius with the sun varies somewhat with latitude. And the “precession of the equinoxes” (a gradual drifting of the constellations over time) means that the constellations today are not in exactly the same place in the sky as they were in ancient Rome. Today, dog days occur during the period between July 3 and August 11. Although it is certainly the warmest period of the summer, the heat is not due to the added radiation from a far-away star, regardless of its brightness. No, the heat of summer is a direct result of the earth's tilt.

Certain Thomasian Writers Guild members old and new and profoundly talented Visual Artists from CFAD UST had a fruitful interaction called LANGIB launched 6pm last January 5, 2007. The College of Fine Arts and Design is such a fertile place with so many creative people on their way, so I am sad to think that they only have 9 units of Literature and English combined. How is that possible? Do they not want their students to explore all creative knowledge?

I interacted with Mark Mangistrado on a minimalist collaboration called Salmon and Lobster Mayonnaise. I will show you a page in this blog. Do come visit.

I had the sad pleasure to meet the kind and innocent faces of a Varsitarian Literary Editor and a Circle writer who came to write about LANGIB. They didn't know what hit them. They didn't know that I had informed their News Editor of my ALIWW recognition last week of October in 2006 and NO ONE came to cover the ALIWW garden ceremony last November 28. Both of them never came across the Philippine Star article written by Rica Bolipata on November 23 and the after article of Krip Yuson also in the Philippine Star on December 4.

Before that, news of my MTV End to the Full Moon, was posponed for three months and when the article came out, it wasn't only badly written, it contained so many erroneous facts. To top it off, the news editor decided to write the errata, two months after the artilce and even that errata was erroneous in nature.

What does it take to be aknowledged in your own University Paper? It is January. It is troubling to think that even if certain news is given to the Varsitarian, they do not consider certain news ground breaking or important.

I have always been proud of being a Thomasian. I have been in UST as a student from 1989 to 1995 and as a teacher from 1999 till now. The editors of the Varsitarian were my former students. Oh well.

If anyone reads this entry and has friends in the Varsi, tell them about this. If they do listen and do something about this oversight, thank them for me. But I will keep well away.

Last year, I sat in the waiting area of the Varsitarian and cried because my heart was broken. Did I look like a frail older woman to be laughed at I wonder, when the kind News Editor walked me out, was he sincere?
Posted by mermaid, with feet at 6:27 AM 3 comments:

I received a lot of books from my dear ones, in particular, Dearest Alvin from San Francisco who gave me nine rejuvinating books and my sister Lisa who gave me a Jorie Graham. And with the italian mini espresso maker from Abbie that makes two excruciating shots of glory every go, recluse city is all I've ever gone to this Christmas Break.

Yes Kit and Toni, I cleaned my room. You'd be so proud. I also noticed my selection of recipie books growing also with the rest of the bunch. And speaking of growing, I'm growing lavander well. The garden is loved well. Waiting for the lemons and pomegranates to ripen. The purple basil has dark purple leaves in this weather. I might serve fresh pasta with these precious leaves to the right people.

My March Birthday I definitely intend to celebrate and here's an advanced wish list to all possible guests. You guys know that the food will be good so do give the appropriate thanks.

6. cds of Tori Amos and Sting.

7. organic fertilizer for my plant friends

Thank you, Kit, for your eyes 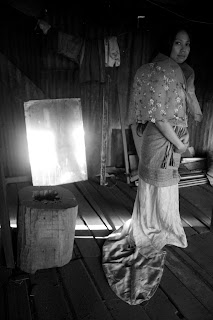 A shoot for my ALIWW scrapbook gave me an opportunity to be proud of my dear friend kit kwe. She brought herself and her "staff" to a location I wanted to explore in a 1930's terno. Her pictures were deeply comforting to me. (I feel sometimes, I haven't seen myself since...) This junkshop in Sampaloc also made me feel whole somehow. I was among the ruins of certain dreams and discarded memories. I myself, as many others, am part of certain dreams and discarded memories. This is my favorite shot.
Posted by mermaid, with feet at 4:06 AM No comments:

March this year, I was able to interact with wonderful artists on a video End to the Full Moon. I want to say thank you to Aia de Leon for arrangement and vocals, Louie Cordero (congratulations on your CCP 13 Artists Award) and Lara Agulto for motion animation, and Zach Lucero For mixing the track on the album.

ALIWW, thank you for the recognition as one of the Now Generation of Young Women Writers. I loved making my scrapbook and will continue to add more "stuff" in the coming years.

Dr. Christina Pantoja Hidalgo, thank you for guidance in non-fiction. The journey is painful and beautiful at the same time.

Grand Creator, thank you for saving Chin-chin and her mother. I have watercolor pencils and paper for her for christmas. She will be able to begin again.

Thank you, Abbie for my mini expresso that I will call Balzac. It will provide me with many wonderful hours of flavourful meditation.

I am humbled by this year and look forward to more of the unknown.
Posted by mermaid, with feet at 5:47 AM 1 comment: